November 1st is National Authors Day. Millions across the globe use this day to celebrate their favourite authors, the stories they share with the world, and to encourage others to discover their own love of reading.

In the spirit of National Authors Day, we wanted to celebrate some of our own in the freelance community. We’ve got books from each of these authors to give away on Freelance Heroes Day this coming Friday – see below for more details.

Sarah Townsend has been a freelancer for over twenty years and, having “been there, done that and got the scars to prove it”, she decided to create a book to help others get ahead on their own freelance journey.

Sarah’s book, Survival Skills for Freelancers, contains all the knowledge she has learnt “the hard way” to help others achieve freelance success more quickly, “without the stress, mistakes and burnout.” With over 170 five-star reviews, it’s proven to be a success. In her own words, “I built a successful freelance career with very little guidance, but not through choice – the support I wanted simply didn’t exist when I started out!” Now, Sarah has provided that support she needed for others.

Community is a key component of support for many, and this is reflected in Survival Skills for Freelancers; not 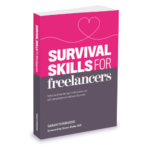 only is community the first chapter, the book also contains quotes from over 100 freelancers, all offering their own wisdom. Sarah believes that “community plays a vital part in the enjoyment you get from self-employment. Whether you’re active in Facebook groups, Twitter chats or online networking, the #freelancefamily provides support, advice, connection, collaboration… and above all, friendship! Yes, you may have gone solo, but you’re never alone.”

Community is also an essential resource for mental health support: “As freelancers, we have to provide that support for ourselves. By recognising the importance of community, support, balance and boundaries, we can give ourselves the best chance of a career that’s fulfilling and fun with less risk of burnout.”

When asked why anyone should buy her book, Sarah just pointed us to her reviews – “they explain why you should invest in a copy better than I ever could.” 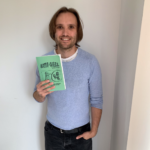 Steve Morgan has always been a fan of blogging, having run one himself on SEO. But becoming a freelancer inspired him to blog more about freelancing itself; about networking, sales, etc. During his freelancing career, Steve found that he “was always a fan of networking (even pre-freelancing, when I used to do it on behalf of an agency I worked at), but the sales side of things specifically always intimidated me.” It turns out, Steve wasn’t the only one; after talking to other freelancers, many shared his apprehension towards sales. To provide support, Steve decided to write his book to show other freelancers that sales and networking didn’t need to be “salesy”.

For Steve, community is there not just for business connections, but to build relationships and provide a support network. In his own words “Freelancing can be lonely” and, having come from a background that included a lot of collaborating, getting involved in a community means “there’s still people I can turn to and ask for advice if I bump into an issue or need a helping hand. And likewise, I can return the favour by helping other people too.”

Like Sarah, we asked Steve why anyone should buy his book and his answer: “because it’s not a sales book.”

Anti-Sell’s approach to selling is just that – to avoid the traditional “sell, sell, sell” of other sales books, and focus on building connections through shared interests, passions and overall make the process more enjoyable: “I like to think that my book approaches sales from a completely different perspective – that you don’t have to sell yourself in a salesy, schmoozy, sleazy way if you don’t want to. You don’t have to go to business networking events, give an elevator pitch, and put a business card in people’s hands (unless you want to) – there’s other ways to self-promote.”

Anti-Sell has also won 4 global book awards and has an average 4.8 out of 5-star rating on Amazon, so don’t just take his word for it! 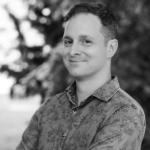 Robert Vlach wrote his book, The Freelance Way, as a result of his long professional journey. Robert founded his company, Na volne noze (i.e. freelance), back in 2005 and it has since evolved into one of the largest freelance communities in Europe, supporting 200,000 freelancers. His book was initially published in Czech in 2017, and after seeing success, he rewrote it for a global audience. Thus, The Freelance Way: Best Business Practices, Tools & Strategies for Freelancers was born. Robert says, “What I really wanted, was to put all those years of working with freelancers and researching hundreds of available sources into a single volume that would be comprehensible and useful for freelancers anywhere in the world.”

For Robert, “the freelance community means the world to me.” It helped him build a vast freelance movement, first with Na volne noze and later with his new European platform, Freelancing.eu. Robert has met most of his friends through the freelance community and it has shaped who he is professionally as well as personally. “The values we share make up, I believe, the very core of modern Western society — freedom, independence, responsibility, personal fulfilment through perfecting one’s trade and a good name, collaboration and mutual trust. That’s how I would describe the immense power of the freelance way. We may be small, but we carry the values that are crucial for a free society, and for us as individuals.”

In terms of why you should buy his book, Robert believes “there are two aspects that make The Freelance Way stand out. Firstly, it is an evidence-based book, drawing from hundreds of quality sources including surveys, studies, interviews, and other books, as well as exclusive advice provided by world-class experts like David Allen, Adam Grant, Austin Kleon, and Basecamp’s David H. Hansson. Secondly, it covers the freelance way of doing business as a whole and in a very comprehensive way.” 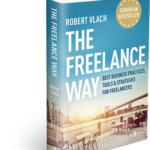 and useful guidelines for managing a freelance business, all of which can be found in The Freelance Way. “This is not a book based on a single experience, field of expertise, or a country of origin. The Freelance Way is meant to be universal, no matter where you are or what you do. And it truly seems to be for most readers, given its high rating of 4.5 on Goodreads.”

Join us this #NationalAuthorsDay and share a freelance author who has helped you! Tag us at @freelanceheroes (@FHChat on Twitter) and remember the hashtag #FreelanceHeroes

For our authors, it seems that community and support are the key components to why they wrote their books; offering others the support they either lacked or were grateful to receive when starting their journeys. In a way, it is about giving back to the community all that they have learnt, to help the next generation of freelancers find their feet.

If you want to explore more authors from our community, the new Freelance Heroes Portal will include a library of recommended freelancer books – and there’s been talk of a Freelance Heroes Book Club for members. Purchase a ticket to Freelance Heroes Day and you’ll get 2 months free access!!

Want to win a copy of either Sarah, Steve or Robert’s book? We have copies of The Freelance Way, Anti-Sell and Survival Skill for Freelancers to give away. See below for details!!

To be in with a chance of winning a copy of one of the books listed above, you need to have purchased a ticket to Freelance Heroes Day on 6th November 2020. Winners will be announced on November 6th during Ed Goodman’s talk on Freelance Heroes Day, so make sure you attend!