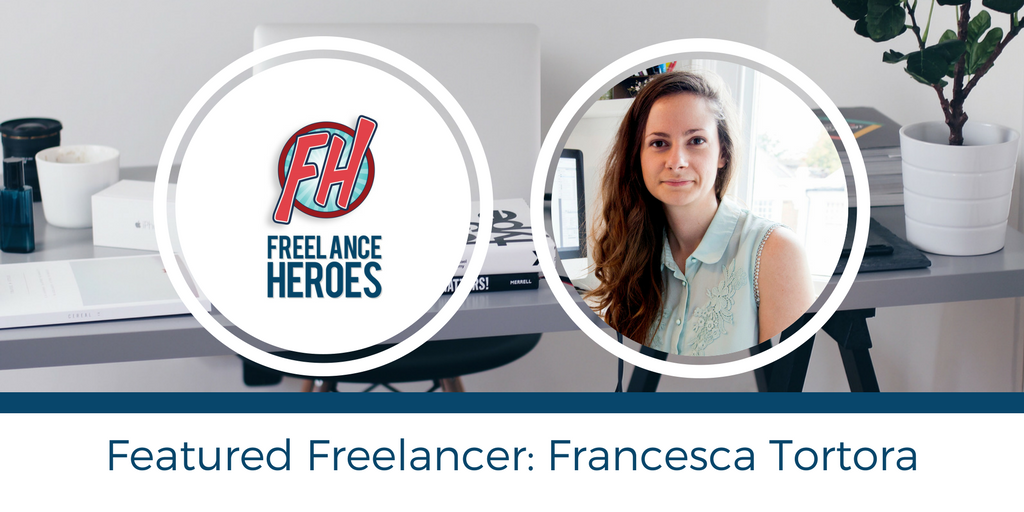 Anthony Burrill is famous for making art out of words, and the one that stands out for me the most is “Work Hard and Be Nice To People”. It’s not just me either, but also this week’s Featured Freelancer, Francesca Tortora. Frankie is also a pianist and I’m still nagging her to write a Freelance Heroes theme tune. For now, however, we have the story of her 5 year freelancing journey, which is well worth a read….

What is your name, where are you based, and what do you do?

My name’s Francesca Tortora (but you can call me Frankie!). I’m a freelance graphic designer living and working in North London. Alongside my design work, I also run a collaborative blog for freelance parents called Doing It For The Kids.

How long have you been freelancing and why did you decide to become a freelancer?

I’ve been freelancing now for about 5 years. I used to have a salaried job in project management / arts administration but retrained as a designer in 2011. I realised that I was working to facilitate lots of other people’s creativity and that what I really wanted to be doing was earning money being creative myself. So I started working part-time in my then job, went to night school where I undertook a portfolio course in graphic design and was very ‘lucky’ to be offered redundancy pretty much as I finished my year of training. That small pot of money allowed me to take a financial risk and give freelancing a shot. I said I’d give it 6 months max and if it didn’t work out, I’d apply for a PAYE job — nearly 6 years later, I’m still self-employed.

What support did you have from family and friends? Did anyone advise you against becoming freelance?

Both of my parents are self-employed (and always have been) so they were very supportive, as was my husband, my sister and pretty much all my friends actually. I think one of the only people who was a bit dubious — or actually told me they were anyway! — was an old friend who worked as a creative in an advertising agency. He was pretty skeptical about little old me completely changing career path, not working for anybody else and just going it alone off the bat in what he knew to be a very competitive industry. I think (hope) I’ve managed to prove him wrong!

Did you use any professional support resources in starting your freelance business?

Because I was being made redundant, I was offered some free training in the last few weeks before I left that company. I opted for a course run by David Thomas Media about setting up as a sole trader which I still refer to now. It pretty much covered everything I needed to know — HMRC, self-assessment, invoicing, cash flow, marketing… It really was brilliant. The other major support network that I have a lot to thank for is IdeasTap. Sadly it no longer exists, but it was a charity setup to support under 30s working in the creative industries. I was very lucky to join their ‘Creative Space’ programme within 3-months of starting freelancing. This meant I had access to an amazing, FREE* coworking space in London Bridge alongside about 40 other freelancers and small creative businesses. The networking, workshops/talks and advice I was given access to during the two-and-a-bit years working there are still vital to my business today. In fact, I’m not even sure I would have really got off the ground as a freelancer had I not joined that programme.

*We ‘paid’ for our desk space in kind through our business so no money was actually exchanged. So in my case, I did graphic design work for the charity to ‘pay’ for my desk.

How would you describe your clients or customers?

Given my background in the arts — and my love of colour! — I tend to work with clients from the arts, media and charitable sectors. From one-wo/man-band sole traders, to small businesses, right up to big corporations and local government.

Why do your clients/customers select you over your competitors?

I’m very much of the Anthony Burrill school of freelancing — I tend to follow his philosophy of “work hard and be nice to people” and you shouldn’t go too far wrong. The fact that the vast majority of my clients come to me through word of mouth and personal recommendations should show that I do live up to that! I also think that clients tend to come to me for a bit of fun, colour and a creative approach to their brief, whatever that might be.

Is being a freelancer what you expected?  Do you work more hours (or less) than you had first anticipated?

Before I became a freelancer I’d definitely been sold the myth that once I became self-employed I’d be working less hours, for more money. That could not be further from the truth!

What app or website could you not run your business without, and why?

Instagram! I think I’ve got one finger on the IG infinite scroll at pretty much all hours of all days. I really do think it’s the most powerful social platform out there at the moment for networking, support, making friends and promoting the work that you do, particularly if you’re a creative / work in a visual industry.

What advice would you give to anyone who wants to start a freelance business, specifically in your field?

“Work hard and be nice to people!”

What are the most notable things you have learnt since starting your business; either about running a business or about yourself?

That pretty much everybody is blagging it at some level. It can be really intimidating when you start out and you feel like everybody else is so much more established than you and knows exactly what they’re doing. But the quicker you realise that’s not the case, the better. As Richard Branson says, “if somebody offers you an amazing opportunity but you are not sure how you can do it, say yes – then learn how to do it later!”

What is it about being a freelancer that you most enjoy?

I love the fact that every success, every recommendation, every pay cheque has been entirely down to me and me alone. And that is such a rewarding feeling, a feeling that I just never felt while working for somebody else. Also, being able to work flexibly is very important to me since I had my son. Working for myself with a now two-year-old to my name definitely has its challenges, but the fact that I can always be there to pick him up from nursery, I can always be there for bedtime, is so brilliant.

What do you enjoy the least about being a freelancer?

I’m a pretty sociable person and find working from home, on my own to be quite isolating. I struggled with this while I was pregnant and particularly when I started back at work after having my son. It was one of the many reasons I setup up Doing It For The Kids, to try and meet/connect with other likeminded parents facing the same challenges that come with working for yourself. And thankfully it’s really paid off!

What is your ultimate professional goal as a freelancer?

My current goal is to launch a product or two that I can sell alongside my graphics work. I obviously work in a service industry where I get paid for my time but, since having a kid, time is at a premium and I am therefore making significantly less money! So, I’m currently looking at ways I can diversify my income and potentially in a more ‘passive’ way. Watch this space!

What one thing do you wish you had known before you became a freelancer?

(I was probably told about this on that sole trader course I mentioned, but…) Paying 9% on my profits above £8,000 via class 4 national insurance was such a kick in the teeth. I ended up having to put that money on an interest-free credit card after my first year of trading because I just hadn’t saved for it. I wish I’d been a bit more prepared for that!

You can connect with Frankie at one of the following locations:

Visit our other Featured Freelancers here and, if you’re a UK freelancer, join us in our Facebook group.